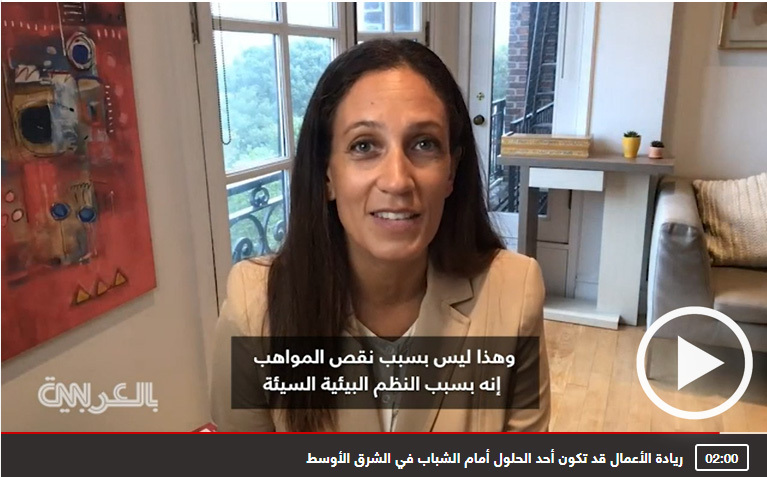 On October 9, 2021, CNN Arabic published an interview with EFE's Senior Vice President Strategy, Partnerships & Communications Jasmine Nahhas di Florio on the employment gap in MENA that has been exacerbated by the Corona crisis.

Click here to read the full piece. (The article is in Arabic language and the translation is below).

Dubai, United Arab Emirates (CNN)--The countries of the Middle East and North Africa must motivate young people to become entrepreneurs and turn their attention to the technology industry to bridge the employment gap that has been exacerbated by the Corona crisis, this is what an executive at the Education For Employment Foundation stated. (Education For Employment).

Jasmine Nahhas di Florio, in an interview with CNN in Arabic, said the region must improve the skills of women and youth in sectors it considers promising, such as the "gig economy", technology and health care, or else it will face obstacles in economic development.

"For example, converting young people from among the world's most tech-savvy consumers to its producers to be ready for the jobs of today and the future," she added, who is Senior Vice President of Strategy and Partnerships.

The Education For Employment Organization (EFE) is a non-profit organization that has prepared nearly 130,000 youth and women in the region for the job market since it was established in 2006.

Di Florio urged countries in the region to intensify the role of women in the labor market because the price of staying "on the margins" is high.

The pandemic affected job losses in the hospitality and tourism sector significantly, while Di Florio saw that new jobs were moving towards healthcare and technology, for example.

The organization covers countries including Saudi Arabia, the UAE, Egypt, Morocco and Yemen.

Although Lebanon is not one of the countries where the EFE is present, the country is facing an unprecedented economic and social crisis.

Tarek Eid, a young Lebanese man studying in London, said that he volunteers with 15 other people to help his countrymen in providing advice to job seekers.

Eid founded the "LEBridge" platform and currently has about 10.5 thousand followers on the Instagram application.

In a statement to "CNN" in Arabic, he said, "When the Beirut port explosion occurred, I wanted to find a way to help my country. At first I used to put jobs on the application, but we expanded until we now provide free advice to those looking for work."

Eid added: "The message I want to convey is that the employment of the Lebanese is very important for the country as well, in order to rise again from its crisis."

The Gulf countries were not immune from the consequences of the Corona crisis, as the Saudi economy contracted last year as a result of the pandemic and the decline in oil prices. Saudi Arabia is the largest oil exporter in the world.

Jihad Azour, director of the Middle East and Central Asia Department at the International Monetary Fund, told CNN in Arabic last month that the world is going through a turning point determined by many factors, including vaccination because it is an important factor in stimulating the economic movement.

Azour pointed out that government institutions should be more effective and contribute better to the economy to provide jobs, while he estimated the youth unemployment rate at 15-20%, and said that the priority in creating jobs is through small and medium enterprises and government companies.